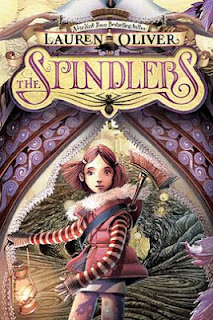 I loved Oliver's first middle-grade book, Liesl & Po, in fact, it was one of my top reads of 2011 so I entered this with pretty high expectations. It would have been difficult to meet those expectations and unfortunately The Spindlers did not. Still it was a fun jaunt.

One morning Liza wakes up and discovers that her brother, despite all appearances, is not her brother anymore. No, he wasn't taken by faeries as is sometimes the case but by the titular spindlers, evil spiderlike beings. Although Patrick can drive Liza crazy, he is still her brother and she bravely ventures Below to recover his soul after her parents refuse to believe the truth of what she says about his abduction. Once there she meets a rat and other creatures on her way to the confrontation.

If you think that summary sounds pretty familiar, well, you're right. I know I've read stories with this same basic plotline before and I'm sure I'll read more. Yes, the specific creatures, settings, and descriptions are different but the story follows very predictable beats if you've read other quest fantasy stories like this. I mean, I liked everything that was happening but nothing really stood out to help keep this story in my mind for years to come, especially when I compare it to my love for Liesl & Po.

I also had a question about something; in my ARC, on page 16, it says, "Spindlers were not like regular spiders. They had six legs, of course..."  If spindlers are supposed to be like spiders, shouldn't they have eight legs? This statement is repeated later in the book despite the picture on the cover of an actual spider with eight legs. Does anyone have a finished copy who can confirm if this was fixed or if it was intended to be six legs. That really bothered me because it's such a simple fact. If they're like spiders, then they should have eight. If they're more like an insect, then they can have six.

Cover: Liza definitely looks her age and this feels more like a MG than YA cover so I'm glad that is accurate although Oliver's name will probably draw some crossover like it did for me.