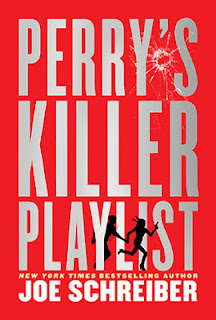 Although I liked Au Revoir, Crazy European Chick and wanted to know more about the titular chick, known as Gobi, I wasn't entirely sure a sequel was necessary. The first book had its own contained story. Still I enjoyed it enough that I instantly wanted the second and after a bit of waiting, I got to it.

I missed the first book's chapter framing device of responding to college admissions essays but this time we have song titles from classic rock, appropriate for Perry's new status as bassist for his rising band. I believe they were mentioned a bit originally but more space is spent this time. His life is pretty good-as I said, he's got the band who are embarking on a European tour and are close to cutting a CD and personally he's dating a hot older woman. Until that is they arrive in Venice and Perry seeks out Gobi and everything goes BLAM, a hundred miles an hour.

I don't want to spoil anything about the twists and turns but rest assured that it feels similar to the first book and each chapter ends leaving you wanting to start the next one immediately, which is super fun when you're reading on your lunch break, let me tell you! We get to spend more time with Perry and Gobi as well as meeting some new assistance and villains who always keep you guessing. I had no idea which way the plot would veer next and it was exciting.

I would definitely recommend reading the first book first so that you know what exactly went down there: not just Gobi's mission in New York that is a catalyst for so many actions in this book but also to see Perry's family drama. You could be brought up to speed in this book but they might feel sketchily drawn without that prior knowledge. It feels like there might be a third book to compose a trilogy but there's no cliffhanger promising that. Just as Au Revoir was primarily self-contained, Perry's Killer Playlist is too.