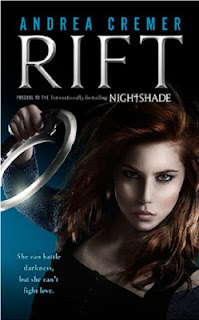 Unlike a lot of people, I did not end Bloodrose furious at Andrea Cremer for one particular event (seriously, there are some angry reviews on goodreads.) So when I decided to treat myself by taking a break from review copies and choosing something special to read, this prequel to the Nightshade trilogy was at the top of my list.

It is billed as delivering the history of Bosque Mar as well as setting the scene for the rift between the Keepers and the Searchers. I have admired Cremer's world-building and history credentials (she has a Ph.D. in early modern history) so I figured this historical setting in 1404 would be incredibly realized as well as featuring the addictive writing that kept me turning pages.

Well I was partly right. I loved the historical settings and I read this book fairly quickly (sidenote: I don't always like deckle-edges but I really liked it on this book). My favorite part was probably in the beginning when we meet Ember Morrow, our heroine for the trilogy, who only survived at birth due to a very skilled healer and whose life is now owed to Conatus for sending that healer. Her father wants otherwise, preferring to use Ember as a tool to enrich his status through her marriage but he cannot fight yet. Ember for her part is thrilled to join Conatus, scorning the wifely arts of weaving and managing a household and craving adventure with her best friend Alistair Hart.

However once she joins the order she becomes highly infatuated with her mentor Barrow Hess, whose age is probably significantly older than her sixteen years (I could not get past this-I realize he can't be that old in the grand scheme of things but this particular age gap grossed me out.)  I was so bored reading on much Ember was attracted to Barrow and since their teaching relationship requires that they spend a lot of time together, it popped up a lot.  I think it might have been more tolerable if the story was in first-person but as a third-person narrative, I don't think that much time needed to be spent on this guy.

The main reason for third-person narrative seems to be to follow Eira, a fellow warrior of Conatus, who becomes entangled with Bosque Mar. This really gains steam in the latter half but I wasn't very invested in the whole adventure. I really wish I remember Mar better as he certainly has the potential to be a very evil villain as some of his deeds in this book suggest.  But Eira was somewhat sketchily drawn here and I always felt jarred when the book shifted to focus on her to the exclusion of Ember.

Overall: My general attitude toward this book is very neutral. It didn't inspire many passionate feelings in me (except for loathing the Ember/Barrow romance, which was so dull) nor did I find it as addictive as the Nightshade trilogy. I will probably not be continuing.