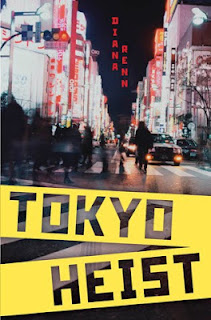 
A Missing van Gogh Painting
A Burglarized Mansion
A Ransom Note
Two Japanese Gangsters on the Loose
Four Destroyed Paintings
An Unexplained Suicide
And Two Girls who must solve the mystery, save the art, and catch the criminals.

This caught my interest for being a YA relatively uninterested in romance as well as for its contemporary Japanese setting. Though there's more to the story, these statements are fairly accurate.

Our main character is Violet and she adores manga, so much so that she is drawing her very own incorporating some of her real-life interests into the art. She plans to continue adding to it over the summer while staying with her father and working at a comic book store. However it seems that her father was unprepared for her arrival, not even telling his girlfriend about Violet's existence! This does not start the holiday off well but the situation picks up when Violet discovers she is going to accompany her father to Japan so he can paint a mural. She also gets to flex her detcting muscles when she learns about a missing van Gogh painting and sketches and the Japanese mobsters who are after her father's patron. Can Violet crack the case?

While writing my summary above, I realized that there are so many little threads in this book (including several I didn't feel like could fit in that already stuffed synopsis). I think that one of my big enjoyments was seeing them all come together especially since they seemed so bewildering in the beginning. Of particular enjoyment to me was Violet's attempts at detection, which she incorporates into a new manga, allowing her to puzzle items out. My disappointment though was that while the drawings are described in depth, they are not included. This is a great example of how artwork could enhcance a reading experience and I feel like this was a missed opportunity.

As I mentioned, there are a lot of threads in this book and though most are juggled and brought in well, I would have liked a lot more aboout two in particular. One was Violet's relationship with her father. He hasn't been very present in her life since she lives with her mom but he also loses himself in his art even when she is around. She is able to challenge him on his disengagment but I wasn't fully satisified.

The other element was Violet's romance. For a long time, she's been in love with her best friend but is afraid to jeopardize their friendship. Consequently, when there are movements toward romance, it is not swoony and dreamy but is instead based on their solid longstanding but mostly unseen and unfelt by the reader friendship.