The Crown of Embers 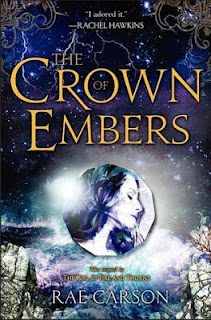 Warning: SPOILERS for book one

This sequel to The Girl of Fire and Thorns has been highly anticipated by many including myself. However after reading some disappointing second books this year, I was nervous to pick it up despite reassurances from Jen Ryland among others. In the end, I liked this book well enough but immediately after finishing it, I started reading The Friday Society and, well, I liked that one a lot more.

I just had trouble clicking with this book. It's not a bad second book; in fact, it has a lot of positives but it didn't spark my interest. Once I finally had it in my hands, I opened it eagerly but I almost had to force myself to continue to the next chapter.

What I still liked was Elisa, who is now ruling as queen after the death of her husband. She is very timid, as a foreigner not prepared for reigning in her own right and faces many trials, both internally and externally. Her greatest strength, although she doesn't seem to realize it initially, is her heart and compassion. She mostly wants to give people second chances and she wants to trust them even when they are in suspicious circumstances. Even those who hurt her in the first book have a chance at redemption.

Something I had mixed feelings about was the romance. Don't get me wrong, I quite like Elisa's romantic interest (I love how honorable he is and committed to her as queen as well as a person) but I found her dithering over him annoying. She kept saying she couldn't marry him, she couldn't be with him but for those who have read the book, what does she end up doing?

The part I liked least was how long it took for anything to really happen (I felt). Early on it seemed that Elisa would go on some kind of quest, leaving her palace. I love court intrigue but quests are fun as well so I spent a lot of time waiting for that part. Once it did finally happen, I was very happy and loved the intense magical action during those scenes. Yes, there is a lot of buildup and okay maybe Elisa almost gets assassinated pretty early on but then she has to recover and it just wasn't as page-turning as I would have liked.

Cover: I like that it's darker than the first since the situations are getting darker as well.