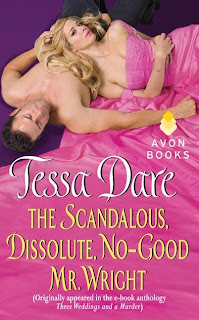 This is a novella, originally from the e-book anthology Three Weddings and a Murder. As there is no murder in this book, you can rest assured only that you find a wedding. We have two characters who have been portrayed as somewhat wanton and unwilling to abide by societal rules. The titular Mr. Wright is a rake of the worst kind while Miss Eliza Cade has had her season delayed until all three of her older sisters are married due to a very youthful indiscretion.  Over the course of several years, the characters repeatedly meet and come to see each other's true nature, which is far more honorable than reputation would lead one to believe.

As I expected, this was a pretty light fast predictable read-that is why I wanted to read it! I also wanted to check out Tessa Dare's writing as I've eyed her books for some time now but have never taken the time to give any a read.

Given that Wright's first name is Harry, I kind of pictured him as rapscallion Prince Harry, which is not an awful comparison. Meanwhile Eliza's name brings to mind Elizabeth Bennet, another favorable comparison. I liked both of them but didn't love them, if you know what I mean. Given that this is just a novella, there isn't really room for other characters (which is nice; I don't mind connected romance novels which introduce the other characters who will be receiving stories later on but sometimes it tends to take away from the main couple). Here each chapter is situated around a meeting between the pair and is intensely focused on them and their budding relationship.

Overall: A fun quick read, especially recommended for those who want to check out Tessa Dare's writing without necessarily committing to a full-length novel.