Love and Other Perishable Items 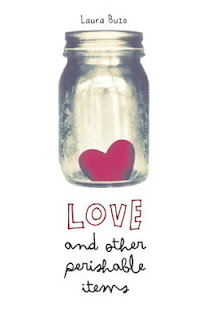 Love and Other Perishable Items by Laura Buzo
4/5 stars
Alfred A. Knopf Books for Young Readers, 2012
241 pages
YA Contemporary

When I first started seeing reviews of this, I was really freaked out to see that it featured a 15-year old girl and a 22-year old man-gross! What I didn't realize, because I mostly only skim reviews of books I haven't read to avoid spoilers, was that they were not dating. She has a crush on the charming older guy (understandable as he seems to "get" her in a way others don't) while he recognizes the inappropriateness and unsuitability of such a relationship. Saying that, I did kind of root for their friendship especially because I often age up a character if I think s/he seems older than written in the text.

In this case, I did find Amelia pretty mature especially for her age so I did sometimes catch myself making that mistake. We are in her head for most of the book so it is easy to sympathetize with what she wants for herself. She is also a responsible worker at the grocery store where she meets Chris, a trainer, and attempts to navigate the tricky social scene. I really empathized with her bewilderment over her slacker coworkers as someone who has been in that position. However I did not have a cute guy to crush on, oh woe is me!

We also get to see inside Chris' head with select journal entries, seeing him struggling with the end of university and the way his friends' lives are moving on. He is a lot of fun and it is very clear that he doesn't think of the young Amelia in a romantic way, which eased my concerns about his possible predatory status. Instead he pines for all manner of other women as he has to make big decisions about his life.

Besides the great leads, this book boasts an Australian setting. I haven't read many books set in Australia but if Buzo's debut is indicative of the quality, I will definitely be searching out some more, including her second, unrelated, title Holier Than Thou.  The hardest part was keeping track of the seasons since they're reversed from up here in the Northern Hemisphere. A sweltering Christmas is just bizarre to me!

Overall: A great contemporary read following the lives of two ordinary people and how they interact and grow over the course of a year.