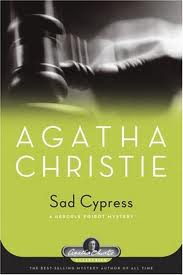 I realized that it had been ages since I'd read an Agatha Christie and that I just happened to own one that had been left unread. Thus I set about to rectify the situation. The title meant nothing to me but it's apparently a quote from Shakespeare's "Twelfth Night" (which I am planning to read later this year!)

The book is divided into three parts.
I. This introduces all of the characters, including the setup for the story as flashing back from a trial, and concludes with someone dying, under suspicion of poison.
II. In this part, Hercule Poirot is brought in to investigate and we go over some evidence although nothing is revealed yet.
III. And in conclusion, we return to the trial where Poirot reveals what really happened. Did the police put the right person on trial? You'll have to read to find out!

As is usually the case in these Christie mysteries, the characters aren't particularly deep or memorable beyond Poirot's usual mannerisms (and his stupid egg-shaped head).

Did I solve the mystery? Well, I am utter crap at that so it will not be surprising to hear that I did not figure out the murderer or specific motive (although it's usually love or money and that was the case here). But I did feel a prickle of suspicion about one point that was crucial to Poirot's deductions. I couldn't manage to put everything together but at least I caught something.

Overall: I would not recommend this as your first introduction to Christie or Poirot but certainly worth a read for the die-hard fan.

Cover: I love, love, love these covers-I am collecting all of them!