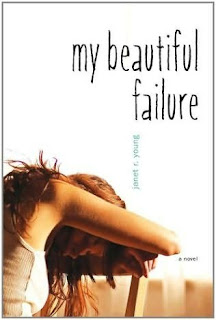 Source: Received an ARC from author in exchange for an honest review.

After commenting on a Waiting on Wednesday post about this book, the author contacted me and offered me a chance to read this early. Of course, I accepted because I was very intrigued by the premise: "Suicide hotline volunteer falls for troubled caller." That is something I have never read before and it's in my favorite genre!

Our main character is Billy, whose family struggled through his father's depression last year and who fears recurrences. It is suggested that he take up a hobby and he channels his would-be psychologist mind into volunteering at a helpline. Although volunteers are only supposed to spend 5 minutes with each caller, Billy finds himself repeatedly speaking to the suicidal Jenney and blurring the lines between them.

I read much of this book with my mouth just agape as this is a book that looks at some tough issues. Billy is a bright sensitive young man but he is still very young and not able to handle everything he thinks he can. Although Jenney is only a voice on the phone, her realness is obvious to Billy and through that, to the reader. Even as I feared the worst, I hoped for the two of them to realize their connection and forge a new happier story for themselves.

While Billy finds solace at the hotline, his relationship with his father fractures. The father is pursuing a second chance at his art and Billy fears the worst. Wanting only to protect the man, he goes about it in a heavy handed and unwelcome manner that only exacerbates their problems.

Despite the fact that this could easily have been an unrelentingly sad book, that was not my lingering impression. I still felt hope and a connection to the characters. They were real people and I wanted them to be alright at this point in time and to keep fighting for their happiness and dreams-always a good feeling to have about a book!

Overall: A compellingly readable contemporary fiction look at some very real-life issues, proving there are no easy answers.