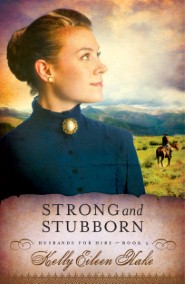 After reading Rugged and Relentless and Tall, Dark, and Determined, of course I had to finish the trilogy! And I'm so glad I did as Naomi's story ended up being my favorite. I think this is because of my deep fondness for her as someone sensible who tries to hide in the background even though she shines.

This book again overlaps with the end of the previous book, quickly integrating the male romantic interest Michael Strode into the Hope Falls community as he steps up to help rescue Lacey and Dunstan from the mine cave-in. His dedication to helping out and skills in carpentry earn him a place and he quickly falls for Naomi, as who wouldn't? But both have secrets to hide.

Naomi has a tortured relationship with her sister that is further fractured when said sister shows up in town to drive a spike into her sister's heart (figuratively but I wouldn't put it past the girl to do so literally). Her malice was incredible and heart-breaking. Meanwhile Michael was essentially bought by his in-laws to give their fallen daughter the protection of his name and he is still fighting the guilt from this bad first marriage. The two have their secrets and they're aren't fully addressed in the book although I trust that the two will work it out behind the scenes as the ending is very rushed.

Another change that was rushed was Braden Lyman, who has been a HUGE jerk for the previous two books as well as for about 250 pages of this book. The last 50-ish pages finally show him starting to wise up but it was just not enough time to redeem him after the way he behaved like such a massive jerk earlier.

There also weren't enough scenes of all four ladies interacting, which was my favorite part of Rugged and Relentless but that's understandable as the ladies continue to put their efforts toward building the town as well as building lives with their chosen partners. The men who aren't chosen continue to be lovably adorable or jerks in need of reminding the score.

Overall: A sweet conclusion to the stories; very similar in structure to the other books (rushed resolution especially). I think it can be read out of order but is probably best enjoyed in order.