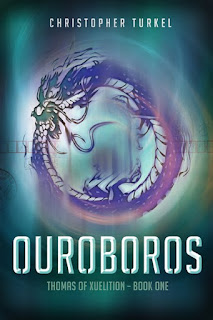 Source: Received an e-copy for review from publisher in exchange for an honest review.

"In a dystopian future, Thomas the assassin is about to face the job of his career -- and his life. After avenging his alcoholic father's untimely death, Thomas begins his transformation into a cold-blooded killer. The Prakanis, a human race with superhuman abilities -- and superhuman egos -- rules the land of Xuelition with an iron fist, and as Thomas learns, it's much easier to work with than against them. When the government hires him to recover bonds from a disgruntled employee, Thomas has no idea what's in store for him. He's stealthy, clever, and one of the best assassins in the business, but what he learns on this mission will change his life forever."


This book was offered to me for review and I accepted after seeing the word "assassin" in the description. Having read a few YA books with assassins this year, I have realized that I adore those kinds of plots. I am also not yet tired of dystopias although I know many of my blogging buddies are but then I haven't read as many.

Overall, I did enjoy this book which is very fast-paced, keeping me on the edge of my seat following the path of Thomas. I'm not entirely certain I understand this new world in which Thomas lives but I could follow the basic rules. It seems that this is the first book in the series, I think there will be time for more to be revealed. As hinted in the summary, Thomas uncovers some big secrets. The plot is twisty and I had no hope of unraveling it so I just sat back and enjoyed the ride.

Then we come to the characters. At this time, I don't feel like I know Thomas super well; due to his training, he keeps his cards close to his vest and I believe it will take more books to really explore his personality. We are introduced to several other characters who will probably play bigger roles in future books but as it stands, we received tantalizing tastes of them.

The worst part for me was actually the formatting on my nook-what should have been the bottom of the page was in the middle and it disrupted the flow of my reading. I was able to train my eyes to skip over it eventually though.