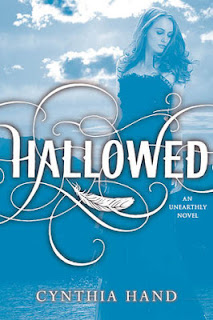 SPOILERS for first book Unearthly as well as Hallowed

OK-it took me way too long to pick up this delightful sequel! I think part of that was my general indifference to angel stories though I've seen this ranked as one of the best, I'll still take  contemporary over paranormal any day. The other part would be a lack of infatuation with Tucker. It seems like almost everyone else in the blogosphere swooned for the guy but I didn't get it. I did like Christian though.

I'm glad I already wasn't a fan of Tucker because his behavior in this book is not great. He's increasingly out of the picture, rather personality-less, and very jealous. As he should be because Christian and Clara are able to draw closer based on their shared angel heritage. But, I'm totally biases as an admitted member of Team Christian. Still I didn't like how Clara shunted Tucker to the side for his own protection. I hate when male paranormals do that to their human girlfriends and I hated it here too even though I don't like Tucker. Yeah, I have complicated feelings about the romantic relationships.

Did I mention there were spoilers? Because more are to come, starting now...

So Clara's dad is an angel? This makes sense. I actually knew that because I read some reviews with spoilers beforehand. I didn't predict that (as I mentioned in my Unearthly review, I bought that he was in New York doing whatever) but it didn't surprise me. Clara just seemed to powerful to have so little angelbood. I'm also "glad" that Clara's mom died. Not because I like reading about moms dying (way too common in books, TV, and movies) but because I wondered about her weakness in the first book and it was explained here.

I'm still wondering about Jeffrey-since we only get Clara's point of view, he does not come off well and I found myself very pissed off at him and his behavior. I'm also wondering about the overall battle between the angels and the Black Wings. I don't feel like all that much happened in this book even though I'm sure it is all pushing toward a grand finale in the third book. I'm especially curious to find out more about Clara's purpose (and how Christian ties into it). It is probably too much to hope that they'll procreate and bring more angel babies into the world but I can dream.

Overall: A really fun sequel although maybe a bit on the long side when considering what happens and what the audience learns. Excited for Boundless

Cover: I liked the purple on Unearthly more but it's good. They look nice on the shelf together.