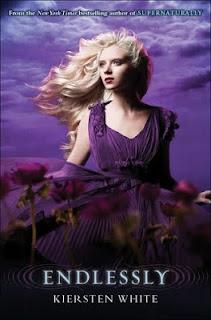 First book Paranormalcy was one of my favorite reads of 2011; however Supernaturally left me a bit disappointed. How would Endlessly leave me? Although Paranormalcy remains my favorite of the trilogy, overall I thought Endlessly was a pretty good conclusion to the trilogy, bringing a satisfying end to Evie, Lend, and all the paranormal characters we've met over the course of the books.

The biggest surprise to me was the changing of my feelings for Reth and Jack, two characters I really didn't like. Somehow though I began to see them with different eyes and appreicate what they added to the story. I'm still confused how Reth is Evie's ex-boyfriend when it kind of seemed more like he preyed on her when she was vulnerable but that is what he has been called multiple times so this time I just let it go. As one of the fae, he is still playing a long con where he needs Evie but he also shows more of the effect being around humans has had on him. Jack meanwhile had pissed me off during his introduction but knowing what we know about him now, he was much more charming to me. They definitely have personality and charisma to keep you hooked!

Another great thing was that Evie and Lend are firmly together. She's not sneaking around and lying to him like she was in Supernaturally although their relationship is by no means easy. There are several new challenges but the two don't give up. However I did find Lend rather dull this go-around. I just don't know that he has much to him beyond his shape-shifting abilities and devotion to Evie, both cool things but certainly not enough to make me swoon in the best book boyfriend way.

Still with all these pluses, I almost feel like the novelty of this world has worn off. What charmed me in Paranormalcy did not this time. The humor didn't make me laugh as much and the world didn't feel fresh. I thought the book dragged a bit as I waited for Evie to make the decision she had to make and I grew a bit tired of her delaying that.

Overall: If you liked the first two books, you're going to want to finish the series. I definitely recommend reading all three back to back if you can.

Cover: Love the purple-this series certainly has great covers especially for those of us who are suckers for a pretty dress.