The Templeton Twins Have an Idea 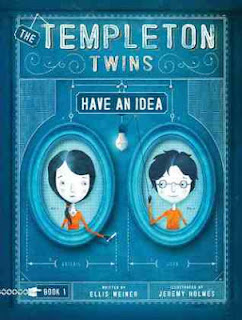 Source: Received in ARC through Amazon Vine in exchange for an honest review.

My review of this book should be split into two parts: the story and the way the story is told.

The first part I am very excited about. The Templeton Twins, twelve-year old John and Abigail (making me think of the Adamses) are fun kids. John is a drummer and Abigail solves cryptic crosswords so they're smart and creative thinkers. They get tangled up in the schemes of another set of twins with a grudge against their father and outwit the villains in a most clever way. I really enjoyed everything about their story.

The second part though includes the narrator, who I found extremely grating. The narrator is definitely going to be off-putting to some people, of which I was one. The narrator talks directly to the reader-which I often like but in this case it is to act superior. I guess I was not in the best mood so I was a little bit more ruffled by this than I otherwise would have been. The narrator kind of reminded me of Lemony Snicket in "A Series of Unfortunate Events" but it has either been a very long time since I read that series or Snicket was much less in your face than this narrator.  Basically my irritation with the narrator stifled my enjoyment of this book.

One other element to note is that this book does have illustration. However since I received an ARC, I have not seen the final drawings. I did really enjoy the sketches though and feel like they were a great addition to the story. That was actually a major draw for me when requesting this book-I am really growing to love when books have additional content like that.

Overall: I feel like the narrator is make-or-break it for the book. Try and read a chapter or two to see if it works better for you!