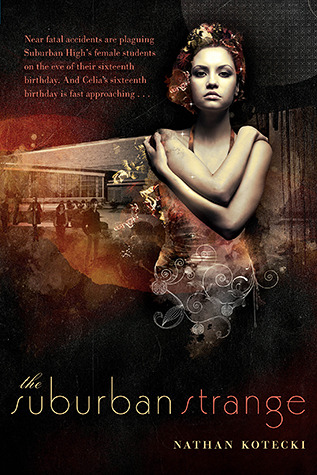 The Suburban Strange was an odd but pleasurable reading experience. I didn't really know what to expect, having not seen many reviews of it before reading but I suspected that it was not your typical YA paranormal romance. This suspicion is quite accurate. I feel like the best way to approach this review is to divide it into the two main parts of the book: the contemporary and the paranormal.

The contemporary falls main character Celia falling in with slightly older kids (junior and senior to her sophomore status) who are very sophisticated, consciously striving to be more cultured and open to new experiences, holding themselves apart from the rest of the student population. This can be seen in their clothing to their carpooling practices to their outside pursuits to the music they listen to. This could have easily led to some kind of horror story where they were inducting her into a dark secret society but no, they were more instruments of her gaining confidence and undergoing a transformation to figure out who she wanted to be. Actually they helped make a rather good high school experience for her. I appreciated the music recommendations in this section as well as a shout out for The Awakening by Kate Chopin which is on my to-read list. I guess I felt I got a bit of education along with Celia in that respect.

The other section, the paranormal part, is almost entirely separate because Celia runs in the two different circles. This relates to the synopsis of girls almost dying on the eve of their sixteenth birthdays. Who could be acting in such a malicious way? Well, Celia teams up with the brightly shining Mariette (a really fun character) who is one of the Kind. That is, she is kind of a witch but you should not use that word. There is also a love interest but certain circumstances prevent him from playing too big of a role in the story. One disappointment in this regard was the final confrontation over the person responsible for attacking those girls-I thought it was over way too fast and easily.

Overall: I can definitely see this book being kind of divisive. It's a book I would classify as paranormal but it's not really like most other paranormals I've read. The characters aren't necessarily ones you'll strongly connect with but the writing is exquisite and I found the plot incredibly intriguing. I never considered putting it aside; I had to know how it would end.