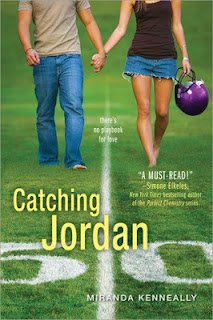 We're going to have to start with an extended personal note for this long review in order to illustrate how this book and I didn't click. I'm a girl's girl. I did dress very tomboyishly in high school (jeans, tees, sneakers, no makeup because why bother?) but my best friends were always other girls. I've had a few good male friends but nothing compared to my girls. I know media often portrays females as back-stabbing, gossipy meanies but my life has not reflected that. I've always felt supported by and tried to be supportive of other women (um, I attended a women's college!) Consequently I don't really "get" women who eschew female companionship. In my experience, there seem to be two main reasons. The first is cause the girl steals other girls' boyfriends (I know this isn't the best phrasing because he can't be stolen if he doesn't want it but...) The second is because she pursues some interest that is stereotypically masculine (often sports but also technology) and looks down on the more stereotypically feminine pursuits. Such a girl also has often had a bad experience with another girl and uses it to judge the entire female population. Jordan Woods is such a girl and hopefully you are seeing my difficulty with her.

The way she came across to me was as someone who thought she was better than other girls because she didn't hang on a boy's every word, she didn't talk about feelings, she thought home economic courses were dumb, she knew things about football, etc. I loved the hook of her as her team's quarterback and that she was a great captain for her team. But I could not get past her derision of the cheerleaders as slutty and stupid when her male teammates receive little condemnation for similar behavior. Then there was Jordan's repeated disbelief that any other girl might know something about football, as if she has a monopoly on football knowledge among those of us with the XX chromosomes (current events sidenote: go Eagles in their game against the Saints tonight!)

Then let's move onto the romance. For some reason, I thought it was about Jordan and a guy who couldn't quite handle her role on the football team. There is that but the guy is also her ocmpetition because he plays quarterback too. Plus he's not really the love interest. THere's also Sam Henry (I kind of hate when characters have two first names, especially in a book where they are often but not always called by their last name), her long-time best friend who has been in love with her for ages and frequently slept over in her bed because she never noticed! I can't imagine parents letting that happen even if they assumed their daughter only had platonic feelings.

Once Jordan knows, she is interested in pursuing a relationship but he bails, not wanting to risk what they have, leaving her to spend over a month really pissed off at everyone. It's angst! It's drama! It's not for me.

However lest you think there were only negatives, I do want to applaud a few elements. I loved the conflict of Jordan with her NFL dad, who never supported her dream but who comes to experience a change of heart. There could have been more nuance and attention spent on that. I also liked Jordan attempting to go to her dream school but discovering they only wanted her as a cover girl. This ties into her relationship with her father as he helps her to explore other options. Maybe what I really wanted was to read a book about a teenage girl and her parents, given that that element seemed to really appeal to me here. The book was also very readable with some humorous moments although I could have done without the cursing.

Content warning: Lot of language, some underage drinking but not the MCs because they are in training, lots of sexual situations but not too explicit.

Overall: NOT FOR ME.