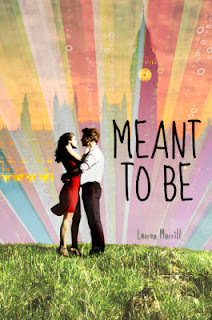 Ah, what high hopes I had for this! The early reviews I read gave me the overwhelming thought that I would love it. There's a nerdy uptight girl who clashes with a free-spirited boy who tries to loosen her up all while exploring the gorgeous historical city of London. I figured I'd identify with the main character and swoon for the guy.

Well I did click with Julia initially. She has great plans for enjoying this trip to London especially because of the special meaning it has for her parents. Although her father is now deceased, she anticipates feeling connected with him again by seeing the places that were so special to them. But as the book wore on, I thought Julia got kind of the raw end of the stick. The aforementioned "free-spirited boy", named Jason, is kind of a jerk. I found him unbelievably annoying. I hated how he (and others around her) were pushing her to be more like him. Yes, she was a little uptight and didn't need to schedule everything so strictly but I didn't want her to be more like him. I wanted him to be more like her-demonstrating respect, not freaking out their chaperone (and they really should have had several chaperones) by running around a foreign city, and just generally not doing whatever stupid thing pops into their head. So Jason didn't work for me.

There was also an event that might have been a surprise so I'm not going to spoil it but which was quite obvious to me (the phone thing was kind of ridiculous-would the school really buy that many phones for these students?). I don't have much else to say because this is a very character-driven novel. Since Julia and Jason were unappealing to me, it soured me on the whole novel. However readers who love London-set novels will surely enjoy that aspect as I did.

Cover: I really love this cover-I think it's SO pretty.