Tessa Masterson WILL Go to Prom 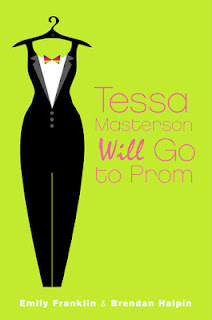 I was interested by the bright bold cover that bespoke a fun upbeat contemporary. Plus it is told through two alternating narrators, one of my favorite techniques. For one more bonus, we have a hot current events topic: homosexuality and all of that controversery that stirs up if a girl should decide she wants to take the person she likes to the prom, if that person happens to also be female.

Our two narrators are the titular Tessa and Lucas, her long-time best friend. After thinking over their closeness, Lucas decides he is in love with Tessa and will ask her to the prom as a big romantic gesture. However Tessa, instead of happily accepting as anticipated, confesses to Lucas that she is gay and sort of involved with another girl who will hopefully accompany her to prom. This quickly leaks out in their small-town and soon a firestorm erupts due to Lucas' impolitic words.

Lucas is not at all careful with his words and they are used as additional support for those who do not want Tessa and her girlfriend at the prom. This also prompts people to lead a boycott against Tessa's parents' grocery store and eventually to close down the prom. Happily this is when Lucas finally steps up and plans their own dance of inclusivity.

If you thought I was focusing a lot on Lucas so far in this review, that is for a reason. I found Lucas to be a much more compelling personality even as he pushes against his best friend, causes her pain, and embarrasses his cool mother. I really grew to like him after being mad at him for his meanness to Tessa because he redeems himself as he starts to fight for Tessa's rights.

Meanwhile Tessa is a much more private person, which extends to keeping the reader at arm's length. I could not get a sense of her and therefore I gravitated to Lucas, ending up preferring his narration far more. This is also a potential problem in dual narrative books-finding one character lackluster and the other exciting and sadly it occurred for me here.

Overall: Strong, pointed writing in places but weak characterization of Tessa did not endear her to me.

Cover: From the thumbnail, I could not distinguish that a tux is shown but that is perfect and eye-catching for this cover.