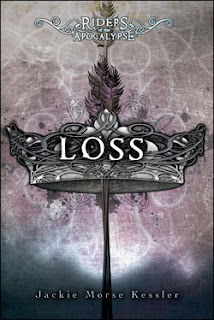 I was so excited to acquire a copy of this book, one of my most anticipated reads of the year due to my love for the previous books in the series Hunger and Rage. While each can be read as a standalone, I highly recommend reading all of the books.

Besides enjoying the previous books, I knew that this book would focus on Pestilence, the Horseman of the Apocalypse who we know the least about. He made brief appearances in the other books but he has definitely been very mysterious. Before we meet him though, we have our "ordinary" human protagonist.

Billy Ballard, great name, has been regularly picked on every day for years with his only hope of a break coming after graduation in two years. All he can is curl in on himself and hope his tormenters don't injure him too badly. Adding on to his pressures are his need to work hard in school to earn a scholarship and caring for his ailing grandfather with Alzheimer's who transforms into an angry man unable to recognize Billy. He has deep self-hatred for his inability to stand up for himself and he wants to be the hero who gets to kiss the pretty girl.

The book is divided into three parts. The first introduces Billy. The third part is about Billy learning to stand up for himself by facing off against a crazed Pestilence. But the second part of the book was a hard read.  In it, Billy is searching for Pestilence who has hidden himself in his memories in order to avoid ending the world. By running away, he has allowed disease to reign unchecked, putting the world in far greater danger than if he was performing his job to maintain balance. I like the plot but not so much the writing, which is very dreamlike and hallucinatory-not to my taste. On the plus side, it also incorporates legendary figures King Midas and Robin Hood in unusual ways.

Besides disliking the writing in the second part, I had two other problems. One was how the pestilence and bullying themes didn't seem to connect as strongly as famine/anorexia and war/self-cutting did in the previous books. The second problem relates to Marianne, Billy's crush, the girl he wants to kiss. We don't get much insight into her; it is assumed that she also likes Billy but I wanted to know more about her and confirm that she wanted to be the girl who is kissed.

I know many people love the portrayal of Death in this series and he makes several significant appearances in this book.  But my favorite literary Death is from Terry Pratchett's Discworld and I continue to prefer him to this version of Death.

Overall: As we delve deeper into the world of the Horsemen, more fantasy-like elements come out. Some people will love that writing; others like me, will not. Still this is a must-read if you've enjoyed the previous books and will help us endure the wait until Breath.