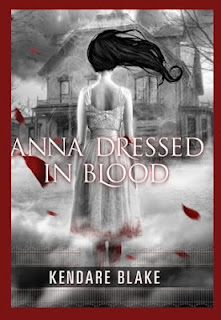 I wasn't sold on this book when it first debuted because I'm a huge scaredy-cat but then I saw it sitting on my library's shelf calling to me and what could I do but check it out?

And I am so glad I picked this as I was immediately drawn in to the world. Our main character is Theseus Cassius Lowood, or Cas for short since that's a bit of a mouthful. After the death of his father, Cas has taken up the mantle of ghost disposal, "killing" those who were already dead and causing harm to humans. He and his mother, a white witch, travel the country following up on tips and Cas is headed to his most challenging yet, the ghost known as Anna dressed in blood, who kills everyone who enters her house. However she spares Cas, prompting him to search deeper and try harder to unravel the mysterious circumstances behind her death and afterlife.

Beyond the complications posed by this most difficult of cases, Cas is starting to make friends for basically the first time since he started ghost hunting (prompting several humorous references to Ghostbusters). Of course it's almost by accident and unwillingly on Cas's part but it happens nonetheless. It's a different experience for Cas, being able to rely on supernaturally inclined human Thomas and queen bee Carmel but not an unpleasant one.

There isn't too much more I can say without revealing spoilers so I'll stop there for plot summarization. I thought the pacing for this was good and it definitely picked up even more at the end, hurtling toward the conclusion with plenty of action and some twists. Although I think of someone who scares easily, I seem to find that I really like YA ghost stories (especially when they come with a helping of romance-not sure if I support the two romances started here though). I would like to see more of Cas's mother and I hope that we continue to investigate the death of Cas's father as I do not have closure in that regard. Excited for the sequel!

Warning: Language-it's not on every page but if you're sensitive to that, you have now been forewarned.