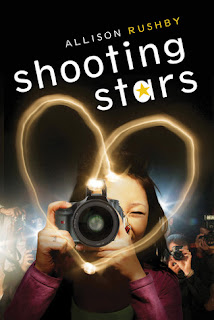 I saw a couple of reviews for this around the blogosphere and was promised a cute, fast read with a sweet romance. This made me eager for a weekend to curl up with this and just leisurely flip through the pages, taken away into a world of paparazzi and stars (I kind of love Hollywood gossip so this was right up my alley).

Jo is almost ready to enroll in photography classes for portraiture but she needs to pap until that enough money has been earned. As the daughter of a paparazzo and with a youthful face, she has some advantages, getting the pictures that no one else can. This generally works in her favor, landing her an exclusive offer to enroll in a facility with hot reclusive star Ned Hartnett and get undercover pictures of him. Although this makes her uncomfortable, the money is just too good. This last job and then she can leave the game to follow her photographic interests.  Complicating her decision is that Ned is actually a celebrity who was nice to her, even giving her a tip for her paparazzi work.  Once there though, Jo's conscience continues to pain her and she learns some secrets about Ned as well as confronting some of her emotional baggage. Together they turn the tables on those who want to exploit Ned's problems for gain.

Due to those reviews, I had some idea of what to expect. But the emotional terrain covered in the books was actually deeper than I had anticipated especially as we learn about Ned's phobia and Jo faces family hurts. I also thought Jo's struggles with conscience over this assignment were intense, perhaps a bit too whiny for me. She was not forced to take this job (there was no blackmail hanging over her; there was just focus on the photography course goal without consideration of other money-making opportunities).

But don't worry, there are still lots of humorous little bits and the overall tone is pretty upbeat especially the ending, which is of course happy with Jo reevaluating her personal and professional life and preparing for great things in addition to a romance.

Overall: A fun, quick contemporary read with a different kind of life.