Between the Duke and the Deep Blue Sea 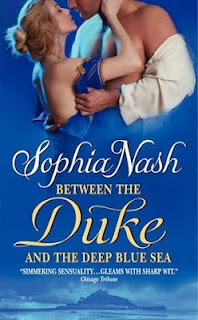 Some of the other reviews I've seen for this book classify it as a "mistorical", meaning a mistaken historical or that which does not take the historical part of its setting seriously. This can be good or bad in the eyes of the reader. For me, that is not usually too important although there were several elements of this book that did make me roll my eyes with disbelief. Overall I liked the humor and the characters enough that I was able to enjoy the majority of the book.

The book opens with a prologue as the newly minted Duke of Kress, Alex Barclay, and other dukes awaken from a drunken stupor, having enjoyed a most raucous night that caused great embarrassment for the crown. The Prince Regent orders everyone to get married, beginning with Barclay as the instigator of the night. He is exiled to his estate in Cornwall to rebuild a fortress and to marry an heiress.

The story proper begins with Roxanne Vanderhaven, Countess of Paxton, hanging from a cliff where her husband left her to die. Although she had grown disillusioned with him over the years from her elevation from tin miner's daughter to peeress, she could not fathom why he might want to dispose of her. Luckily Alex saves the day and is convinced to hide her until she can seek her revenge and make an escape.

This all sounds a bit ridiculous but as I was laughing quite a bit, it didn't matter to me. The humor continues to escalate as Alex attempts to avoid matrimony while tormenting Roxanne's husband and Roxanne tries to maintain her cover as a poor relation of Alex's. Of course, both are falling in love despite his hard shell and her married and presumed dead status. There are lots of other complications along the way.

But what really sold me on this book was the main characters. Roxanne is fairly sensible in the context of the story as well as headstrong and independent. I liked her immediately and loved that she was able to have some friendships with ladies who will presumably marry the other dukes over the course of the rest of the series. I also really loved Alex, a refreshing palate cleanser after the jerk in A Rogue By Any Other Name. Alex is far from perfect with unenlightened views about women but deep down, he's a softy with deep love and respect for his great-aunt as well as care for his ancestral lands.

There is a lot that is blipped over such as Alex's experiences in the French Revolution and Napoleonic Wars (we were only offered glimpses) and Roxanne's husband's precise motivation for killing her (arrogance over her common roots while being content to spend her money?) Additionally there were  a few too many characters with similar names that led to my confusion whenever many people were in the same scene. And the ending is a bit ridiculous with it's "I am Spartacus" aspect. Nonetheless this will probably be an enjoyable read for those who stress the comedy part of a "romantic comedy." I definitely want to read the rest of the series!