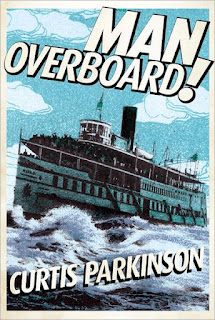 This book caught my eye when I noticed that it was set during WWII; I didn't really read beyond that but I figured boating and war is an interesting combination.

Thus I got to be surprised to discover that this book is set in Canada on a riverboat between Prescott and Montreal where two best friends have secured jobs for the summer of 1943 as most of the other men are off at war.  Scott and Adam become involved in preventing German espionage, inspired by the real-life fact of German agents arriving in Canada to promote their war effort.

In the beginning, everything happens very quickly. Scott accidentally stumbles upon the secret German agents and is threatened, an Allied agent "falls" overboard, and Adam is kidnapped in place of Scott as leverage to keep Scott quiet. Then there felt like a rather long stretch of the novel where Scott worried about what to do and Adam held tight while waiting for an opportunity to escape. For the end though it picked up as they scrambled to rescue Adam and to prevent anything bad from stopping the Canadian war effort.

On the surface, this was a really fun book with some cool historical facts and great villains-I am always in favor of making Nazis the bad guys because they are the quintessential bad guys of the twentieth-century (this also holds true for movies: see the good Indiana Jones films and the recent Captain America). But Adam and Scott did not feel like real people to me; they were just characters doing x in service of y plot line. Generally when I love a book, it is because of the passion the characters inspire in me and this book just didn't have it.

Overall: A fun historical story about a lesser-discussed part of WWII.

Cover: I really like the bold font for the title and author-I think it calls out to the reader and grabs the attention.