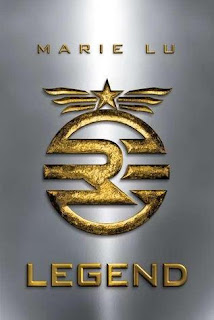 I saw quite a bit of buzz around this book so I wanted to pick it up and see if it lived up to the hype. I was surprised to reach the first page and discover that the font was in gold (I did enjoy the matching color font in Maggie Stiefvater's Forever trilogy). Even more surprised was I to finish the first chapter and discover a different font, color, and narrator for the second chapter. And that is how the whole story is told: in alternating perspectives. Now this can be difficult if you end up preferring one narrator to the other and then you're just waiting for her to return but I was pretty evenly split.

Our first narrator is most-wanted criminal Day, a fifteen-year-old kid from the slums who has been bothering the Republic for five years ever since he failed his Trial. He causes great disruptions but seems to run alone and make a point of not killing anyone. Until the night he does kills Metias, brother to our other narrator June.

I really loved June (just the teensiest bit more than Day). She's a military prodigy, who earned a perfect score on the Trial (the only to do so) and has enjoyed a spectacular career at military school, where she is preparing to join her older brother in safeguarding the Republic until his tragic death leaves her alone in the world (she was already orphaned) and starts her off on the path to track down Day. Of course, because she's brilliant and innovative, she manages to find Day and have him arrested. But is Day as bad as the government says or is there more to the story?

I think what appealed to me about June was, well actually a lot of things, but two in particular. First her brains made me think of River from Firefly, a show I am currently savoring rewatching. This connection makes me happy. The other main reason is I love when characters think their government is so great and then slowly discover that major things are being covered up. Because then this character gets to go in high-gear and kick some major butt as June does!

Now don't get me wrong, I liked Day too. I loved their similarities-how both are so smart and can easily adapt to various situations; how they don't want to hurt people; how they're so protective of their families; how they want to do the right thing. This helped me root for their romance, which ended up taking a bigger role than I would have liked by the end but I'll forgive that.

Overall: A splendid time was had by me as I devoured this book-I would very highly recommend it!