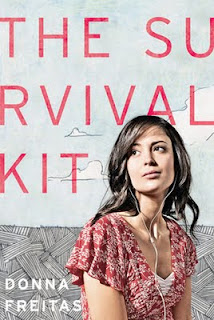 This book wasn't initially on my radar until I saw another blogger rave about it (sadly I did not bookmark that page; if I can find it, I will link) and I'm so glad that I gave it a chance as it was a very strong contemporary.

Rose Madison is devastated from the loss of her mother, pushing everyone away, her friends, her boyfriend, anything that reminds her of the past. She cannot imagine moving forward. The title comes from an idea of her mother's, a schoolteacher who gave survival kits to the parents of her students, who sometimes struggled sending them off to school for the first time. Rose discovers one for herself shortly after her mother's funeral and the book follows her attempts to survive.

This book features several things I like. First hockey, a sport I am growing to appreciate, starting with last year's Stanley Cup. It's so exciting and I love all the violence. Second, Rose is lucky enough to have some great friends, who don't let her collapse even when she seems bent on doing so. And thirdly Rose's love interest is named Will. I love YA book boys named Will (see Firelight and Perfect You). I was a little worried as it seemed at first that Will would be the person to lead Rose out of her depression, making him the one to save her. That would have been tremendously unsatisfying as the MC ought to save herself. There are more complications to come though.

I do have to mention in my review, something that hopefully doesn't make me sound heartless but instead reflects my (very fortunate) experiences of not losing any one close to me. I understand that Rose is broken and wanting to push away her boyfriend, her friends, anything that makes her think of her mother.  Still she sometimes frustrated me with her self-centeredness-I know, a teenager who only thinks about herself! A first-person narrative which focuses on the main character! Who would have ever guessed it?! But it's a fine line to tread, keeping the reader's sympathy and sometimes I felt imposed upon to care about Rose no matter how she acted. I especially hated the portrait of her father as a man descending into alcoholism to cope with his grief despite the fact that he still has two children who are very much alive and in need of parental guidance. Sometimes the reader just wants the characters to be pulled back from the brink of despair.