Life Is But a Dream 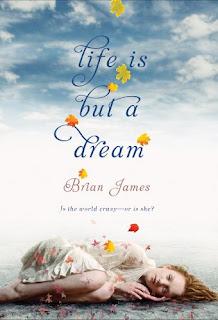 Life Is But a Dream by Brian James
Feiwel and Friends Books, 2012
234 pages
YA; Contemporary
4/5 stars

Source: Received an e-ARC via Netgalley in exchange for an honest review and an ARC through Amazon Vine.

This book caught my interest from the song lyrics for "Row, Row, Row Your Boat" as well as my deep love of contemporary novels. By the time I picked this up, I had read Ultraviolet (review to come) and had high expectations for the writing and characterization (yes Ultraviolet is about a character with a neurological phenomenon while this is about a character with schizophrenia but both are about female teenagers placed involuntarily in mental facilities.

I have never really thought of myself as a reader who pays attention to the writing, preferring instead to focus on the plot and how the characters make me feel.  But it is something I've been noticing and happily the writing in this was glorious and intense, capturing Sabrina's unique perspective on the world. I did have one problem which was the alternating between present in the center and flashbacks to the past. They were usually sudden and had me questioning if they were memories tinged with Sabrina's interpretation or complete fabrications; Sabrina is not an entirely reliable narrator.

But I do still think character is important so if you can't sympathize with her, then even the gorgeous writing probably won't be enough for you. I really felt for Sabrina, who mostly lives in her head and has been largely ostracized by her classmates. She has different priorities than their popularity-obsessed minds, looking outside of the narrow high school bubble. In particular there was one boy who treated her abominably without repercussion and certainly didn't help her healing.

Besides our main character Sabrina, there is also the mysterious Alec, who in some ways appears as an entitled rich jerk whose rich dad got him in a mental facilities instead of juvenile detention. He seems to be the only one who can understand Sabrina and encourages to stop taking her medication and to hold onto her beautiful thoughts.  But in some ways Alec also seems like a figment of Sabrina's imagination which had me alternating my interpretation. I've read one review that came down on the side of made-up but the last pages had me saying he was real.

Overall: A powerful contemporary with beautiful imagery and an intriguing main character.

Cover: I love the colors of the leaves and the sky but I don't like Sabrina's hair on the ground.