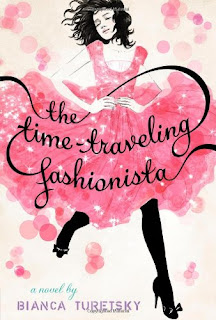 After reading April at Good Books and Good Wine's review, I knew it was time to pick up this book. Short chapters, fast read, fun times, gorgeous illustrations-just the kind of book for me!

Main character Louise Lambert has a deep love for vintage fashion and is excited to receive an invitation to look over some vintage clothes. Mysterious proprietors Marla and Glenda allow Louise to try on a beautiful pink dress (the one represented on the cover) when she collapses.  When she awakens, she is addressed as Miss Alice Baxter, famous actress traveling across the Atlantic on a luxurious liner in 1912; when Louise realizes it is the Titanic, she desperately tries to change history.

The pictures were so colorful and beautiful. I am not particularly fashion-savvy but I can appreciate the designs for these elaborate dresses.  I do also have a layman's appreciation for vintage clothing, stemming from my love of the Golden Age of movies. The illustrations were definitely my favorite part.

The rest of the book was a little shallow; Louise takes FOREVER to realize she is on the Titanic, which is foreshadowed by her history teacher's discussion of the event and immediately obvious to me when I the date is revealed. Of course the book also made me feel old-Louise was born in 1999, several years after the movie was released (note: it is also being re-released this year and I can't wait to see it on a big screen since I wasn't able to see it originally). Perhaps if Louise was older, she would have taken more of an interest in history and thus would have discovered her location faster.  Louise also might want to read more about time-travel and try not to change history-it's just not a good idea.

The other characters didn't have much depth: Louise's persona has a maid who is very sweet; her persona's guardian is a decent chap; there's a doctor who is basically just evil. The characters from Louise's real life didn't have much of a presence either but it sounds like this will be a series so there's plenty of time for them to be sketched out more.

Overall: A cute, middle-grade story, perfect for tweens and those interested in fashion.