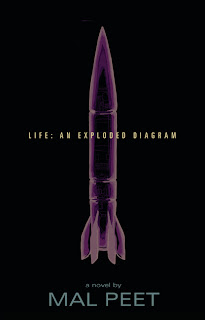 When I received the Vine Newsletter, I browsed and didn't see anything that immediately caught my eye; so I started searching on goodreads and saw that this was historical fiction during the Cuban Missile Crisis, something about which I know little. I love historical fiction but don't always read very much of it and don't see it hyped around the blogosphere. Thus I requested this. Then I saw an enthusiastic review on Forever Young Adult, which solidified my decision to read this; I really enjoy their review style.

However I was surprised when I first started reading as the book does not begin with working-class Clem and his romance with the local landowner's daughter Frankie during the days of the Cuban Missile Crisis. Instead there is quite a bit about Clem's grandmother Win and her romance during World War I and then Clem's parents marriage during World War II leading to his birth during that period.  This part was a little slow for me, mostly because I was thrown by it. I kept thinking, "Isn't this supposed to be about the 60s?"

Then we do reach that time period, having followed Clem growing up and experiencing some upward mobility. He isn't very interested in the political part as he is first focusing on school and then absolutely infatuated with Frankie, rebellious and daring. I personally didn't feel much for their relationship, as it seemed more based on the physical and I prefer love stories that are peppered with witticisms no matter the implausibility.

However my favorite parts were the weaving of historical fact in to the story. There are some tidbits during the early sections but it really picks up, focusing on John F. Kennedy and Nikita Khrushchev. The book cites several primary sources for its information and it read well to me. I found it more absorbing than Clem's romance as the suspense was much more powerful. Two teenagers with disapproving parents or battling groups of politicians with the potential to blow up the world? I mean, come on, one is clearly more interesting.

I do have to mention that it did make one error that bugged me. On page 233 of my ARC, it states that Kennedy was the youngest-ever president. He was actually the youngest-ever ELECTED president. Theodore Roosevelt was almost a whole year younger when he was sworn in after the assassination of William McKinley. This is very important to me since the 1858 in my ID comes from Roosevelt's birth year and quite frankly I don't like Kennedy so I don't want to laud him for an untruth. This is a very minor detail that only appears on the one page but it is a pet peeve of mine. I hope this is corrected in the final copy and will update if I can confirm that.

Overall: Excellent writing although the characters didn't entirely work for me. The historical aspect was very strong and would probably be an excellent resource to students studying the time period; give them something very interesting to supplement what might be a dry text.