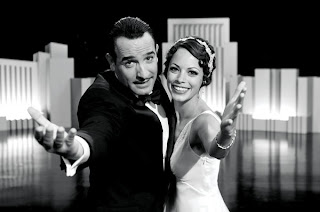 After seeing the great success of The Artist at the Golden Globes as well as the adorable Uggie, my mom became interested in seeing it. Since it expanded to a theater near us, I readily agreed and we set off. There were lots of reasons to be excited. I love classic films and what I knew about this evoked "Singin' in the Rain" and "A Star Is Born" as well as the only silent film to win Best Picture "Wings."  I am also trying to watch every Best Picture winner and I'm more than halfway through that goal; I will be ahead if The Artist triumphs on February 26.

We set off and settled in to our seats and were promptly surrounded by people. My sister mentioned that The Artist hadn't done that well since expanding to more theaters but it sure seemed crowded there! The audience definitely skewed older and we saw some pretty lame trailers.

The movie itself was pretty good. My absolute favorite part was the dance sequence that closed the film; this picture is from that scene. I was pretty astonished at how much I enjoyed the no talking part. I'm very comfortable with black and white films but have had a harder time with silence. I also really loved the actress Bérénice Bejos-she is so beautiful. Her and the lead actor both have very expressive faces, necessary for a film like this.

All in all, I am happy that I saw this movie but I'm not insistent in recommending it. I probably would have enjoyed seeing Mission:Impossible Ghost Protocol again more (in fact, I almost bought tickets for that instead, just because I was thinking of it!)

Posted by The Insouciant Sophisticate at 3:00 PM