The Girl Is Murder 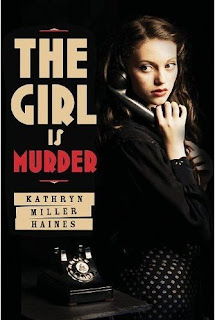 I love the cover for this, as it immediately conjures up a historical mystery for me. This one is set in 1942 New York City, with a young girl and her injured private detective father (lost his leg at Pearl Harbor).  Beyond references to the war and topical events like the zoot suits beatings, the most obvious reference to the time period was the slang. There was a lot of slang, which was a little jarring with how much is peppered through the novel but still easy enough to understand.

Obviously the war plays a huge role. Most of the characters have at least one relative serving or who has served and the uncertainty about their fates hangs over them; food and cloth is rationed and the draft is about to be implemented which will call up most of the young men at the main character's school. I really enjoyed all of these elements as they painted a vivid picture and created a great world. I felt immersed.

What I didn't like was the main character Iris, who starts the book out okay. She's worried about her father and his ability to pay the rapidly piling up bills; she's missing her dead mother; she's scared about starting at a public school after years at a tony private girls school; she seems pretty normal. As the book progressed though, she grated on me. She lied and lied and lied and continually acted in ways that she knew were wrong! She was also a bit of a snob in her transition from private to public school, although the quality of her education definitely decreased.

The other characters were a mix of fun and annoying. They definitely had suspicious qualities and they also had their own changes in personality, with lying, wrong-doing, and double-crossing. They were not nice people. The only characters I liked were the adults, Iris's father and Mrs. Mrozenski, who owns the place where Iris and her father are lodging. She is an immigrant who gives Iris space but does care for her.

I did not solve the mystery and actually ended up a little confused with all of the players involved and their twisted motivations and actions. But I think there is the possibility for more stories in this mystery setting and hopefully Iris will have learned her lesson and behave more correctly.

Cover: Beautiful-love her hair! However it does remind me of some other YA covers so perhaps it isn't exactly distinct enough.