Everything You Need to Survive the Apocalypse 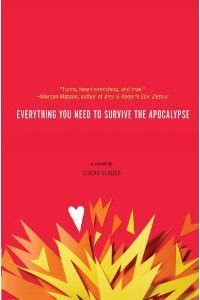 Everything You Need to Survive the Apocalypse by Lucas Klauss
Simon Pulse 2012
401 pages
YA; Contemporary; Faith
4/5 stars

When I originally read the official summary for this book, it looked like a cute contemporary romance from the point of view of the boy rather than the girl, the perspective I usually read. But after skimming more reviews, I saw that it was more about boy meets religion; while some reviewers felt misled (understandable), it only made me more excited about reading it. Most of the novels I read that involve faith are from a Christian writer and publisher so I thought this would be an interesting change.

And in that regard I was right. The parts with main character Phillip investigating religion (as prompted by the "unconventionally hot" Rebekah) had some parts that resonated so strongly with my experiences from when I first began my exploration of Christianity and eventual acceptance of Jesus. His feeling of bewilderment at church services, general unease and confusion, and awkwardness with people in his life who are not Christians-these were all experiences that rang true with me and helped me immerse myself in the story.

Of course he also had a lively sense of humor and that combined with Klauss' engaging writing style kept the book moving. I flew through this over the course of a lovely evening, enjoying being kept a little off-kilter and not entirely able to predict what would happen next.

Saying that I had some problems with the book as Phillip is a bit of a sad sack with little motivation; I was able to feel a little bit for him but I didn't fully identify (also possibly because he is male). There were also some extremely painful parts as Phillip has awkward social skills and has basically no idea how to handle a romantic relationship; there were also parts with his friends, with his family, with other adults that made me cringe. He pushed and pushed at Rebekah and it was so wrong of him and yet so understandable.

Warning: Language and underage drinking (something I did not like)

Overall: Mostly enjoyable mix of pleasure and awkwardness over the course of a teenage boy's encounter with Christianity and his first relationship.