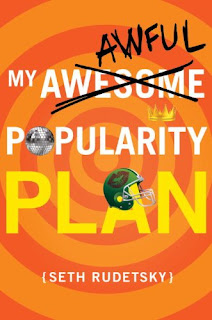 I have a total talent crush on Seth Rudetsky. I've seen him be hilarious on that Legally Blonde talent search show, I've read his columns for Playbill.com, and I've heard him on Sirius XM on Broadway. He's so funny and so knowledgeable about music and Broadway. However I wasn't sure if he could write a novel with characters I would care about-he's so good at that other stuff; could he be good at this too?

Well, I am happy to say that I found this book immensely satisfying with a likable MC and lots of funny bits, even if it is very predictable. The plot revolves around unpopular Justin, a sophomore with an intense crush on jock Chuck and a burning desire to be popular. However he's awkward with weird friends until he comes up with a brilliant plan: pretend to date Chuck's secret girlfriend Becky since her dad hates Chuck; get closer to Chuck; become insanely popular. Of course, as the reader, you can spot all sorts of flaws with this plan but that doesn't mean that I stopped reading even as I predicted every element of the plot.

First Justin is a sweet kid even if his priorities are a little messed up. He loves piano and he knows every bit of Broadway minutia; I would totally want to be friends with him and like Becky, may even have developed a misguided crush, were I around him. His best friend Spencer is also a great kid even if he's a little frustrating. I also liked that both boys knew they were gay and were pretty comfortable with that despite some of the awful kids around them. The story isn't so much about being gay as about navigating high school pitfalls, which everyone can relate to.

Second this book is SO funny. I'm already familiar with Rudetsky's writing style from his columns but I found his fiction writing just as enjoyable. The pacing was pretty good although some parts dragged too much for my taste.

And my last main point is that I loved the representation of the parents. They're pretty aware of Justin's life and a little interfering but with good intentions. They seemed pretty realistic and are responsible for some of the funniest moments. Love good YA parents!

Now I'm not saying that this book is in any way groundbreaking. As mentioned it's very predictable but I think the humor adds a welcome aspect to it and really made me enjoy it. I closed the book with a big smile on my face because I was just so happy!