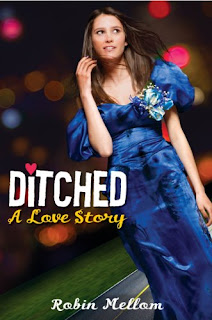 After a string of meh books (perfectly fine books that didn't really excite me), I was looking forward to a funny, charming YA contemp. And I got that-main character Justina is a bit of a worrywart and chatterbox, in the vein of a Meg Cabot heroine; a high compliment in my opinion.

The story begins at the end with Justina ending up on the side of the road, alone with a stained and tattered dress. She totters to a 7-11 where a sympathetic cashier and customer listen to her meandering story. She does this by pointing to various stains on her dress (the e-ARC I had was in greyscale, which made the stains difficult to discern; I am not sure how this will be represented in the actual book) and explaining how they came about on what was supposed to be the best night.

You see, prom is the night where Justina is going to break her eight month no-kiss sabbatical as she has realized her feelings for her best friend Ian and wants to seal the moment with a kiss. But nothing seems to go right. First she looks like a blueberry after following the advice of her mother; then she gets curry on her dress before even leaving the house. And the incidents just pile up from there.

Justina gained a reputation due to he variety and multitude of boys she kissed. In response, she made a vow not to kiss again...until she became such good friends with Ian and saw him in a certain green shirt. Now that's all she wants from the night and it seems like the one thing she won't get due to various misunderstandings and stiff competition from another girl.

While Justina and Ian were perfectly fine characters (not that we get that much of Ian since he spends most of the night off on some mysterious errand), I totally fell for the Stoner Mikes and their girlfriends. They were nice people (I guess you could say mellow) who were so warm and protective to Justina when she needed it most.

Overall: I got what I expected: a cute, funny, sweet story; worth curling up with one afternoon.

Cover: What an atrocious dress-those sleeves look so eighties although I do like the color as I'm a sucker for blue. However it is very true to the book so yay!