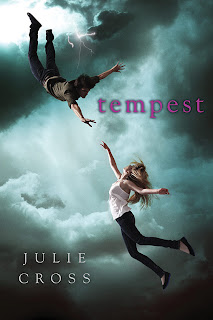 This book has had a generous publicity campaign; I remember seeing it mentioned in Entertainment Weekly along with the news that the film rights had been bought and I've seen many reviews of it around the blogosphere. Meanwhile I was excited about a male MC (since I tend to prefer female) of college age, lots of exciting action, and a perennial beloved topic of mine, time travel.

However this is not time travel as I like to picture time travel. My time travel is free-wheeling and crosses time and space at the mere whim of the imaginer (my time travel is more fun!)  This one seems more grounded in what time travel might be like as main character Jackson is limited to his own life, and very short jumps at that. Throughout the book he is experimenting with the parameters of his ability along with the help of his genius friend Adam.

But besides time travel, Jackson is very focused on his girlfriend Holly; when two men break into her dorm room and shoot her, it kicks off a very strange succession of events, starting with Jackson jumping around his past.  Most of the book actually takes place in 2007, two years before the story is set, when Jackson is supposed to be a high school senior and before he has met Holly.

Once he realizes he is stuck there, he sets out to track down Adam for help and Holly because he can't imagine being without her.  Now I have nothing against Holly but she didn't have much substance so I'm not really sure why Jackson cares so much. Of course, Jackson is kind of a tool; there were a lot of times I didn't like him. I thought Adam had a much stronger characterization and was more sympathetic. Holly didn't do much other than being the girlfriend to Jackson. Beyond these important peers, Jackson also has to confront memories of his dead in 2009 twin sister and his relationship with his father, which is not the strongest. Additionally there are other time travelers and most of them seem to have malevolent intentions. As you might guess, there is a lot going on!

A tricky element for time travel books is keeping track of when exactly it is. For the most part the book is successful, but sometimes my attention wandered and I was confused about who knew what. One thing I appreciated, although it didn't always work out like I wanted, was that Jackson cannot change the past when he jumps. I'm not entirely sure how that works because there are times he definitely interferes but it does not materially change the present.

Overall: Some fun action, exploring time travel and tough decisions but the characters didn't grab me. Jackson was a very matter of fact narrator who kept the narrative moving fast but didn't let me inside.