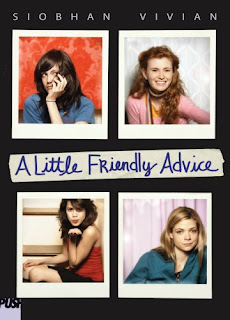 While browsing my library, I came across this book. Having mostly enjoyed Vivian's book Not That Kind of Girl, I eagerly picked this one up, expecting a fun contemporary story about friendship.

The four girls, as represented on the cover, are main character Ruby, her best friend Beth, their friend Maria, and the girl who has recently started hanging out with them, Katharine. Ruby thought she was used to her father's abandonment of her and her mom. But she's not, as she realizes when he suddenly returns on her sixteenth birthday throwing her emotions into a tizzy.

I read mostly YA and I can handle different levels of maturity in that category but wow I thought Ruby was really at the lower level of that scale. I think I tend to prefer precocious or overachieving characters to ones like Ruby. By that I mean, teenage characters who use alcohol as a coping mechanism, who rage at parents when said parents really don't suck, characters who don't seem to possess much common sense. I don't require characters that I can admire but I think it is a preference of mine.

And I did not admire Ruby who does not handle the events in this book well at all. My favorite part about her was the boy she meets named Charlie, who's practically perfect. He's able to deal with his egotistical, bullying father AND Ruby's neuroticism. He's also really charming and, in my imagination, super cute. I found him far more compelling unlike Ruby.

Yes, Ruby does demonstrate some growth. But as a whole, I found the plot and characters all over the place with many receiving only superficial treatment. I wanted more character development and a more cohesive narrative. Still I do enjoy Vivian's writing and will be on the lookout for more of her books.

Cover: Really good-the pictures relate to an actual plotline in the story and I can imagine each as one of the friends.