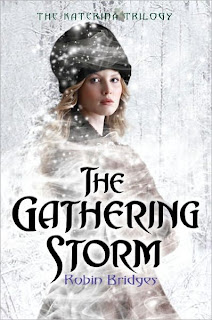 I was so excited about this one-historical fiction in tsarist Russia that's not about Anastasia? Sign me up! Except that there are also fantasy elements (unexpected but something I can handle) and well, then there's the characters.

The fantasy elements actually play a huge role to my dismay. The time period is already so rich that the book felt overstuffed with so much being introduced even if not integral to the plot. The main conflict stems from the blood drinking royal family of Montenegro who have very sinister intentions toward the tsar's family and toward our heroine. But there is also conflict between two Faerie courts and all of this is tied up with another plot against the royal family. I think we have only scratched the surface of what Bridges has planned in the paranormal realm.

Then we have the characters. Main character Katerina wants to be a doctor rather than the proper expected wife; fine. But I found many of her decisions questionable, not a trait I seek in a doctor. While she can study serious scientific texts, she apparently can't handle wearing an amulet to protect against being charmed despite having seen its efficacy in a previous outing. This gets her engaged to someone who wants to drink her blood and absorb her power of necromancy. She is also threatened with pain to her family if she tells what she knows about him; BUT her father and brother already seem to know some of that stuff as well as have some success at protecting the family so far. She is clearly in over her head and she really could have used their help instead of relying on her young cousin and herself. My main problem with this book really does stem from her and her inexplicable changes in behavior (sometimes sensible, sometimes dumb).

However there are some great action sequences and some sawoony romance with Grand Duke George Alexandorvich, second in line to the throne behind his brother Nicholas, although I just looked up his end and it is...not so happy; however this character seems more healthy and vigorous than the real-life man. He is suspicious of As a history nerd, I really liked seeing Nicholas court German Princess Alix, a woman he adored but didn't marry for quite a while, even knowing their eventual fate (they were the end of the Romanovs). I knew that their marriage was a love match and I look forward to reading more about these romances in future books.

Overall: I originally rated this a 3 but I kept thinking about this and what might come in a second book so I upped it to 3.5.