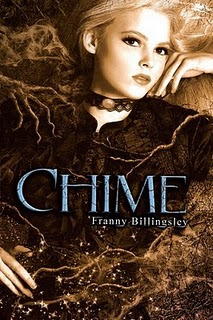 Although I had seen this book around, I didn't really pay attention to it until the Chime/Shine kerfuffle. Having already read Shine (and loved it), I wanted to compare this one. So I guess there is some positive here in that it made at least this reader want to be fully aware of what happens in each book.

I had seen a lot of positive reviews of this but I also saw reviews, saying it didn't get really good until 100 pages in; um, I don't want to read 1/3 of a book before it gets good! Although I do kind of agree with that assessment. The narration and writing is quite different from other YA with our main character Briony being unreliable and poisoned by lies that have imprinted themselves on the way she views herself and her world. I think it took at least 100 pages for me to adjust to the world and the writing.

For example, and I fully admit that maybe I was a little dumb, but Eldric is introduced as having a lion eyes and tawny mane, which made me think that he was part lion and perhaps the world included many people who were part animal. I'm fairly sure that Eldric is not part lion but that is how I continued to picture him. The world also seems to be set in an entirely alternate fantasy world but there are also mentions of modern objects such as cars. Additionally Briony would occasionally veer off course in her narrative, leaving me gaping and wondering how she had made that connection. See, it's confusing!

Still I pushed on, hoping to see what others had seen. Unfortunately I did not end up seeing it. I think this book would be well worth reading for those who enjoy the prose but I prefer something a little less complicated as well as more contemporary.