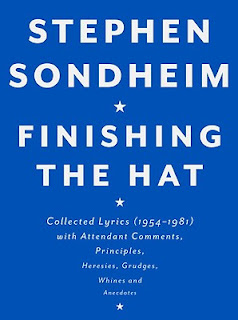 While Stephen Sondheim is one of my favorite composers and lyricists (Gypsy, Assassins, and A Little Night Music being among my favorite musicals), I wasn't originally interested in this book as I thought it was just a collection of Sondheim's lyrics. Interesting as I find the writing, I can read all of the lyrics online or just listen to the songs as I have recordings for all.

Then I found out that Sondheim also included notes about the writing of the shows and about specific lyrics, which sounded very interesting. Another bonus was the pictures of the cast and of Sondheim's handwritten lyrics although they're in black and white so you don't get to see the colorful clothes and hair styles of the cast.

The book covers roughly the first half of Sondheim's career, from 1954-1981. The shows included are Saturday Night, West Side Story*, Gypsy*, A Funny Thing Happened on the Way to the Forum, Anyone Can Whistle, Do I Hear a Waltz?*, Company, Follies, A Little Night Music, The Frogs, Pacific Overtures, Sweeney Todd, the Demon Barber of Fleet Street, and Merrily We Roll Along (asterisks denote shows where Sondheim wrote the lyrics only). This includes some great shows but I remain more interested in the shows that will appear in the second collection (specifically Sunday in the Park with George, Into the Woods, and Assassins).

This is a great collection for ANYONE interested in musical theater or songwriting as Sondheim does not just discuss his career but also lyric-writing (and creating a show in general) and evaluates other lyricists, such as Lorenz Hart and E.Y. Harburg. I hope that will be continued in the second collection as well.