Look, I Made a Hat 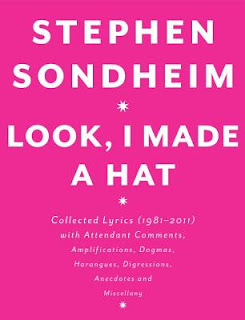 After finishing the first book Finishing the Hat, I was beyond excited to get my hands on this second book, which features a string of awesomeness, if not popular successes: Sunday in the Park with George, Into the Wood, and Assassins (my personal favorite Sondheim). And those sections were great. I loved finding out their origins and following their development. I was already pretty familiar with most of the lyrics but reading them over brought new pleasures. It was great to linger over and savor my imagination of how they might be staged (I have seen the filmed stage versions of the first two)

There are also more essays from Sondheim such as his opinion on awards (he appreciates those that come with cash) and one on critics. These were fascinating and I would have enjoyed more of them. I kept paging through some of the later sections, hoping for more essays.

Unfortunately the rest of the book wasn't too my taste, featuring Passion, Wise Guys/Bounce/Road Show: A Saga in Four Acts, and other musical, movie, and television songs from Sondheim. I just didn't really care. I wanted to read about complete shows that I loved. While I do think I'll find at least something to enjoy in Passion whenever I sit down to listen to it, I haven't done so yet and it fell flat for me. I feel so bad saying that but this review is my opinion and that's how I felt. Certainly theater geeks will want to read these but I found the content of the first book far superior.

Overall: Obviously something you'll want to complete the set but I preferred the first book.