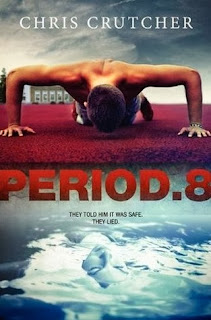 I first read a Chris Crutcher book in 2011 as part of an YA Overlooked Book Battle (Whale Talk to be specific) and was blown away by his bold writing. I soon sought other books, finding that they tended to fall into a pattern and were branded by his distinctive writing style. Therefore I realized I would not be able to binge on all of his works in one weekend but would need to pace myself. Jen was kind enough to pass a copy on to me and it has been a while since I partook of his writing so I figured it might be a good time to do so.

Immediately I was jarred with an italicized opening chapter that provided no context to me. What was going on? The next chapter situates us in the story introducing MC Paulie and his girlfriend Hannah as well as one of the main conflicts which is that he cheated on her. Having a zero tolerance policy for cheating, Hannah ends that relationship. The male propensity for cheating is brought up the following day in their "Period 8," a lunchroom gathering led by a teacher almost retired that allows all to speak about anything but expects confidentiality. When a classmate goes missing, that security is threatened.

The biggest lingering impression I have of this book is that it doesn't quite feel like the other Crutcher books I've read and loved. Yes, there is a male athlete at the center facing an array of problems, there's an unbelievably cool teacher, and all sorts of other issues for the classmates (there also seems to be way more swearing than I remember). I think the problem for me was that it went in the direction of thriller with a big conspiracy at its heart and yet I found that conspiracy the least compelling part and the short length didn't give much time to set it up nor to unravel it.

In general, I most enjoy the passionate protagonists at the core of Crutcher novels with insights into the punishing lengths they go to for the sport they love and debates over how to become the kind of adult they want to be. Those parts are still here to some degree. In case the water on the cover doesn't make it explicit, Paulie is a swimmer and period 8 naturally gives rise to some of those discussions as does Paulie's close relationship with the teacher.

Overall: I think I was underwhelmed based on my previous stellar experiences with Crutcher's books; it seems like he tried to do something a bit different and it wasn't really what I wanted.

Content: Language would be the big one but also references to underage drugs and light sexual content discussed.