Ramblings and the Week to Come 03NOV13

Ramblings:
It was a pretty good week! As I mentioned, I took Wednesday off and had a fabulously productive day. I watched Zero Dark Thirty which was super intense but really good as well as four hours of the British series "Silk" which took a lot off of my DVR. I also reorganized my closet and because it was so successful, this weekend I tackled my bookshelves and under my bed. It's very much still a work in progress but I'm loving the feeling that I have slightly more open space plus I uncovered three pairs of shoes so it was almost like I went shopping but without spending any money.

Halloween was great fun! I dressed up as Minnie Mouse, which was very easy and super adorable. I already had a black shirt and tights as well as yellow shoes so I just needed to pick up a red and white polka dot skirt and ears. It got a lot of compliments so I was pleased.

Have I mentioned that I'm a planner? Well I've been stressing over what I wanted to give my coworkers for Christmas (12 people within my department plus a few others outside) and I'm really struggling beyond cookies, which I haven't ruled out. Is anyone else planning and have an idea to share?

The Month That Was, October:
I thought October was a pretty good month with 26 books read but it turns out my average rating was only 3.71 after the 3.83 rating of September. The books I would be most likely to recommend are The Burning Sky by Sherry Thomas and The Heiresses by Allison Rushby with the caveat that I can see why others wouldn't like them.

The Month That Will Be, November:
My fourth blogoversary is coming up! I'm not planning anything big but since I like to celebrate in style there will be a giveaway; still working on the details. Otherwise just more reviews and continuing to work on War and Peace.

My Obsession:
Finally it's not music related. Instead it's the website Shoes of Prey, where you can design custom shoes according to your own design tastes. Below is a pair I've been working on and hope to purchase. I could not find a pair of tan patent heels I liked and this just might end up being the solution. If you like shoes, you'll have a fun time on this website! 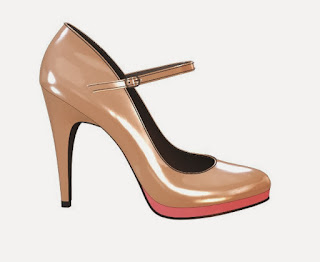 Week to Come: Lots of random goodies this week, across categories and genres-I hope you enjoy the eclectic mix and find something you're interested in :)