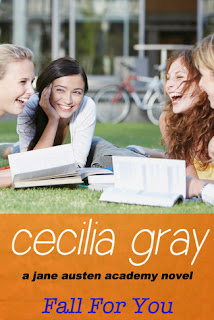 Jane Austen is my favorite author and consequently I have an incredibly difficult time resisting the various retellings on the market especially when they fall into the YA category as this does. My interest was originally piqued by seeing the fifth book which twists Emma as that's probably my second favorite Austen but I was pleased to start at the beginning, which unsurprisingly takes on Pride and Prejudice. So how did this stack up?

Well, I have two main opinions on it. One is evaluating this book as a novella (see page count above) that will connect with five other stories. The other is looking at it in comparison to its inspiration, which I will address below. On its own, this book is super cute. Lizzie is a brash passionate young woman, seemingly afraid of nothing and leading the charge against the introduction of boys to the Jane Austen Academy, the mystery behind who now owns the school, and especially against a potential name change. Dante is part of the first wave of boys at the formerly all-girls school and he is proud, far too good for everyone around here, clashing with Lizzie's passion. However, to the eyes of everyone around them, this looks an awful lot like sparks are flying-could love be in the air?

One fun twist is that Austen's six main heroines are represented in this book (and will be throughout the series as each gets her starring role). Primarily Lizzie, Ellie, Anne, and Emma are featured here though peeks of Fanny and Kat blink by. That also means they fulfill different roles. For example, instead of Lizzie's sister Jane getting her heart broken by Bingley, it is Anne and her Rick whose relationship Dante meddles in. Ellie also fills the role of best friend for Lizzie in lieu of sister Jane. There is a Wickham who plays little to no role while Charlotte and Mr. Collins make no appearance. Also there is far less mention of family though Lizzie does have two living parents and Dante is very protective of his younger sister.

When I stack this book up against its origin though, there's no contest. P&P has layers upon layers that this short book has no hope of matching. It keeps the most basic plot of Lizzie and Dante being proud and prejudiced but most of the side stories are jettisoned. I was surprised by how barebones this adaptation ended up being (I expected a lot more of Wickham flirting with Georgina at least) but appreciate that Gray didn't try to update every angle for a contemporary setting. It's also fun to imagine the six heroines as friends because I know how they have been friends to us book people for centuries :)

I suspect that this book/series will be more meaningful to people who are already familiar with Austen's novels and especially will help differentiate all the characters (there's a joke about there being so many E names and I know I might have found that confusing if I didn't already know everyone.) Has anyone read this series but not Austen? Would love to know how you found them and hopefully they encouraged you to dive into the original text.

KIND OF SPOILER:
Wow does Dante's family have money! Can you imagine being so rich that you buy a private school for your daughter and then decide to make it coed so your son can attend too? Because that's what his family does...as if it's no big deal.
END SPOILER

Check back tomorrow for a review of second book So Into You, a twist on Sense and Sensibility!