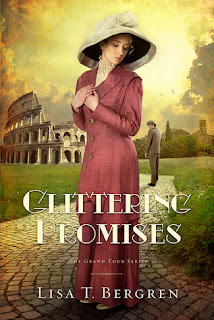 Well, we have come to the conclusion of the Grand Tour series which began so promisingly in Glamorous Illusions and continued in Grave Consequences. I'll admit that there were times when I found myself bored and just waiting to finish so I could say it was done but I did like the ending, which left me with a fond impression of this book.

I think Glamorous Illusions impressed me by taking me into a glamorous world of touring Europe for months with that being your sole occupation. Can you image? Just going to fabulous museums, seeing incredible works of art and buildings that have stood for ages with nary a care about money or responsibilities. But this is the third book of their tour and I was kind of over the grand tour by this point. Luckily there are other plot lines like Cora's continued mostly commitment to their bear Will but also battling lingering feelings for the wealthy charming Pierre.

Something I really liked was the exploration of attitudes toward women in business and politics. Though there is a vile character who says some hateful things, most of the men are pretty supportive of Cora's aspirations. She's an heiress, yes, but she also wants to do work that matters and use her wealth for positive efforts. One arena might end up being women's suffrage, a cause I can certainly get behind! But either way she's not going to blindly follow a path laid down by her father, instead choosing to forge her own way and abide by the dictates of her conscience.

The best part for me though was the Christian faith aspect. These books are from a Christian imprint and I remember God playing a part in both of the preceding books. However here it really poured out and over. Cora is brought to her knees at several points: trying to discern about a husband, how to spend the money she has so suddenly been handed, coping with grief, and wrestling with her identity, for starters.

Overall: Though the last few chapters really made me smile, I ended up feeling like this was dragged out and may have been better served as a duology. I can certainly understand the desire to have three books but so many passages felt like filler to me. Still, if you started the series, you'll probably want to finish and this does continue in the style begun by the previous two.