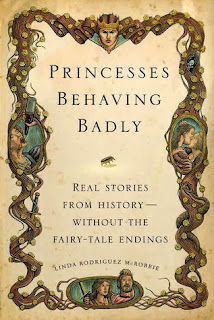 I have frequently talked about my love of princesses and fairy tales so I loved the hook for this book, which references real-life princesses and how their lives don't really fit that mold for whatever reason, often because of their excesses and/or insanity.

Something I appreciated was reading about princess outside of Europe; yes, we look at a few princesses from Asia, Africa and even the Americas though most are based in various Europe countries. However the definition of princess and real is very flexible. Several of these women merely styled themselves as princess without the ancestry one would expect and several of the stories are most probably from mythology and not well grounded in fact. I thought they were fascinating nonetheless but go against what the very title of this book promises.

In general, I found the tone of this book very gossipy, which quite frankly works for me as gossip sites are some of my favorite pleasure reading (my fave for the past four or so years is Lainey Gossip). It was disconcerting though as I'm used to such figures being treated with a bit more reverence. But this book relishes in their profligate ways and sexual excesses. It started to feel overwhelming especially as I read this book in about one day. I was personally shocked at some of what was described-a good reminder that it is not just our era where we see unbelievable wealth and reckless spending.

Probably the most interesting tidbit for me was the examination of Juana the Mad, who I thought was a sad byproduct of royalty's tendency toward inbreeding. However this author suggests that she was framed as mad so the men in her life could rule in her stead. I'm embarrassed that I never considered this possibility and merely accepted this story spoonfed to me.

Overall: A rollicking ride through history looking at some overlooked or even forgotten women who made their mark on history.

*A note: I read an e-ARC that was sorely in need of some editing; I assume the finished copy will be corrected because there were some terrible errors. The finished copy should also contain a bibliography, which was sadly missing here as I would like to explore some of these figures through a more scholarly lens.