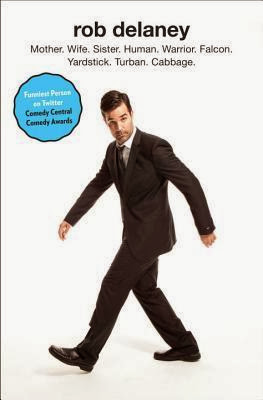 Earlier this year my friend dragged a group of us to a comedy club. I wasn't much impressed with the opening acts but experienced some good chuckles from the main attraction, being this man Rob Delaney. Later I started following him on Twitter and then requested a copy of his book anticipating some laughs.

I'm pleased to say that I got them in this memoir although my lingering impression is that the book was just too short. I don't have a lot to say though I liked tracing Delaney's journey through alcoholism, injuries, depression, and ultimately recovery; he's lived for sure. I thought I'd share a few lines from the book to give you a taste for his writing style, if you are not familiar with his comedy (although he was voted "Funniest person on Twitter" at the Comedy Central awards so why don't you? ;)

For starters, there are some delightful turns of phrases such as:
"This boy might go on a killing spree one day, so distant is reality from his sad, flailing grasp"
"a beautiful, shimmering red flag"
"where my rented Nissan Altima so passionately kissed a branch office"

I think it's the descriptors "flailing," "shimmering," and "passionately" that really add the punch to these lines. Oh and I'm not giving you any additional context for these either-you will just have to pick up the book for yourself!

But because I'm so sweet, I will share a few longer (hilarious) quotes:
"Cheesecake...Who invented that? Probably Jesus of Nazareth. Or maybe Louis Pasteur. It makes me physically sick to think that Barack Obama won the Nobel Peace Prize, yet the name of the inventor of cheesecake isn't tattooed on Dick Cheney's face."
-When polling people at my office, 5 out of 7 people chose apple pie over cheesecake (though one did admit he'd take either), which is just a disgrace if you ask me. How do I work with these people???

"Willful ignorance or resistance of alleged facts has been a big ingredient in any success I've had."
-I actually kind of want to keep this in mind for future endeavors; who needs "reality" anyway?

Overall: I think if you enjoy Mr. Delaney's humor, you will enjoy this book. Check out his twitter to get a feel for his humor; be warned though that it's definitely adult unlike the MG/YA novels I more frequently review here.