Cracked Up to Be 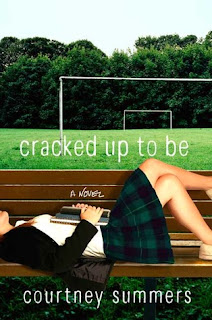 Source: Won What Goes Around bind-up through Sammee at I Want to Read That; see my review of Some Girls Are

I have read all of the other currently published Summers novels but had somehow missed out on her debut. When I won this bind-up, I knew this was my chance to correct that grievous oversight! Something in the spoiler section really upset me but mostly my feelings are positive about this book.

Immediately I was engaged as the book opens with narrator Parker musing on four years of high school and the dark things that have hung over them. She personally has rebelled against this by drinking on school grounds, neglecting to complete homework, and generally completely overturning her image as "Perfect Parker" to the dismay and fear of her parents and school officials. As italicized sections tease, something went down at a party. This may have involved Parker's ex Chris, his new girlfriend/her frenemy Becky, and their other friend Jessie but the details are only fuzzily shared until the final revelations.

I had read about this book beforehand so I thought I knew what the secret was; I had gotten it muddled though so I was a little off-base but on the right track. Certainly I never would have guessed what actually went down. It's a dark secret for Parker to handle and it bothered me that she didn't share with anyone, not even a professional even as she repeatedly talked about wanting to end her life. Though present, her parents are pretty ineffectual and easily manipulated by Parker.

Parker is not a character everyone will like. I personally loved her sass and attitude, how she does not care what others are saying to or about her, and her determination to push everyone away. These kinds of prickly characters often appeal to me and Summers kept the narrative tight and on her instead of attempting to cover too much ground. She is awful to the people around her who somehow manage to stick around and who continuously try to get through to her.

I'm torn on the ending. On the one hand, it's not super happy and there are still some loose ends, which are not endings I tend to like. On the other hand, it was a perfectly realistic ending for this book and the kind I like would have been ridiculous.

I could not believe Summers killed off Bailey. Among all of the moments that shocked, that is the one that just destroyed me. I started to have inklings about Jessie and Parker but Bailey's death completely blindsided me. Surprisingly as I skimmed some other reviews, he wasn't even mentioned but I couldn't skip over the emotional power this scene exerted on me.