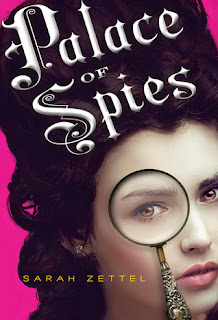 Peggy Fitzroy is in a pickle. Having refused to marry the cad chosen by her uncle guardian, she is out on the street. Miraculously she has made the acquaintance of a mysterious Tinderflint who wants to install her in the court of King George I as a lady in waiting to the Princess of Wales. She is impersonating his former ward and becomes privy to all matter of secrets including some that may have led to her predecessor's murder...

Looking for some evidence that Americans don't know British history? How about the fact that I initially passed over this book because I don't like reading about the 17th century. If you do know your British history, you may have ascertained that I somehow confused George with Charles I and Charles II and come to the conclusion that I don't like Restoration-era stories, which is the case. I get very anxious waiting for their deaths to come. Luckily this is set a bit later though the throne is far from secure. While the Hanover line has begun in George I, there are still Jacobites who would prefer to crown James the Pretender, a Catholic to complicate matters. This forms the bulk of the political background. I think if I had a more solid grounding in this history, I might have grasped certain points faster but Zettel did an excellent job of filling me in and I don't think I missed anything by not been more familiar. I would be interested in reading a non-fiction account of the period though if you have any recommendations.

Before I delve more fully into this particular story, I wanted to share a bit more about Peggy's patroness, the Princess of Wales. I read a lot against princesses, how the Disney princesses don't encourage girls to aspire big for example or how princesses are antiquated and antifeminist, etc. Well, Princess Caroline is an example against those arguments. Though as a woman, she has limited official power, she cultivates a glittering court including mathematicians like Gottfried Leibniz as well as political ministers like Robert Walpole and is able to work her influence through softer means. I think she sounds like a fascinating figure and would greatly like to study her more.

But moving on to our fictional characters. This story centers on Peggy, the droll narrator and main character of this novel in 1716. She is orphaned, raised in her uncle's home by the charity of her aunt but kicked out after refusing to marry her lecherous fiance. Fortunately she falls in with Mr. Tinderflint, Mr Peele, and Mrs. Abbott, a trio who mold her to impersonate the now deceased Lady Francesca Wallingham and to play a role at court. Peggy has spirit for sure as evidenced by her musings on the gift that is a fire poker when men are around as well as courage for undertaking this ordeal. I loved seeing her trying to unravel the many agendas at court and especially when she got down to business in sussing out the exact character of Lady Fran.

Other important characters are Peggy's cousin Olivia who makes only a few brief appearances once the uncle shatters that relationship as well as two potential love interests though only one is really viable. Tinderflint is an especially interesting character-is he a quivering coward or does he have hidden depths? We only start to tap into him by the end of the book. Happily it sounds like there will be at least a sequel and I, for one, very much look forward to that!