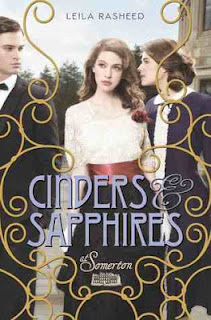 Wow-this book basically has everything! It has so many of the plotlines from "Downton Abbey" and similar stories, all jam-packed into a very easy reading style. I polished this book off very fast and felt quite accomplished as I've been a bit behind on my reading goals.

Since I mostly liked the book, I'm just going to point out a few criticisms, not to be a downer but in order to be more balanced. The book is narrated in third-person past tense and although it mostly focused on just a few people, it shifted around, sometimes quite abruptly and caused some confusion. This mostly happened at the beginning so either it was edited out or I became accustomed. My second main criticism is just that there is so much stuff, much of which felt familiar (due to the fact that I actively seek out books set in this time) but also which subsequently didn't receive much treatment. There is only so much space and we have a serious amount of plot threads set up. The upside is that now there is so much to look forward to learning about in book 2. Third and final criticism would have to be the instant love that strikes Lady Ada in the prologue; one kiss and she's a goner, this secret, forbidden love motivating her for the entire novel. Never mind that there are a ton of cute boys to kiss (or at least to flirt with since kissing was much more serious back then); I just didn't feel the love for this guy since we barely got to spend any time with him.

Now that the negative is over, what did I like? Well I really liked our two main characters Ada and Rose, young lady of the house and maid respectively who have the lion's share of the narrative. I especially liked how Ada is a bluestocking, interested in studying at Oxford and promoting women's suffrage, a cause close to my heart (think about it: just 100 years ago, I would not have been allowed to vote! That makes me kind of mad!) Rose is the sweet and shy ladies maid with a secret past (that should be fairly obvious to most readers). Other characters include Ada's new stepfamily with a conniving stepmother, whose portrait was much more cartoonish than the similarly crafty Lady Summerset, really conniving stepsister, and two stepbrothers with their own secrets, more extended family, various politicians, and a household of servants. Although there are a lot of characters, I did not feel overwhelmed by them, keeping their names easily straight for the most part.

I also loved the many themes that were touched on, especially women's education as touched on above. I feel like this book has the potential to be fun and frothy while also exploring the fascinating history. Of particular interest was the British Empire's involvement with India as well as hints at trouble on the Continent (it is only 1910 so we still have quite some time before WWI breaks out-hope the series will reach that point!)

Overall: A light, fast-moving historical novel-perfect for those craving another hit of "Downton Abbey" as well as for people who like lighter stories in general.

Cover: Love! Although the title makes me think of Cinderella, which is not really a part of the story, I don't mind the misleading. I love the swirls all around although I feel bad for the girl (I'm guessing it's supposed to be Rose) having it go through her head.