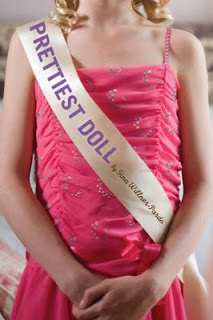 This book grabbed my interest with its cover and blurb about beauty contests. I've never had any desire to participate in one and I don't really watch them on television but I adore "Miss Congeniality" as well as several other books about pageants. I trace this back to my love of books with lots of female characters; it's a setting that allows for many women to turn up. So although I didn't really know much about this book, I requested it and gave it a read.

My ending impression is a feeling of being dazed, for several reasons. One is that the pageant doesn't really play that big of a role. Rather it is more of a specter hanging over the pretty Olivia who starts to wonder if there is more to her than just her looks or if that is the only reason anyone will ever value her. I was hoping for more backstage drama but am used to one aspect of a book being played up in the summary so I was okay with that. A second reason for confusion was the writing, which seemed to be in a gray area between middle-grade and young adult. Olivia is only thirteen and somewhat naive yet I thought some of the themes seemed a bit older. However I'm more familiar with MG fantasy so I may not be the best judge of categorization. Third is the plot which, as is unfortunately the case with some contemporaries lacking the epic questness of a fantasy, seemed to meander despite the relative shortness of the book.

What is the plot, you ask? It is partly Olivia rebelling against doing pageants as her mom desires and partly about her own discovery of self. This journey is contrasted with Dan, a runaway Olivia meets and joins, traveling from Missouri to Chicago where both have family to confront. Dan is fifteen but he looks ten due to a hormone growth deficiency so he has his own battles with appearance to wage. Together the two learn some lessons and begin to forge new destinies for themselves. Again, despite the short length of this book, some of their scenes really seemed to drag on. Still I liked the characters for the most part; it just lacked a punch to the gut to make me gush about this book.

Other Opinions:
Wandering Librarians also reviewed Prettiest Doll positively.
Otherwise I haven't seen a lot about this book; if you've reviewed it, please leave a link in comments and I'll add it!