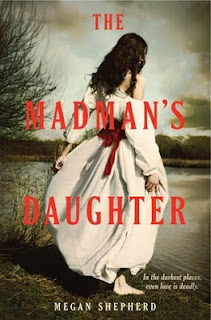 To start, I thought I had read The Island of Doctor Moreau but about halfway through this book, I looked at the wikipedia page and realized that I had not in fact read the book. That explained why so much seemed unfamiliar. Now that I have read the synopsis I do not expect to ever read it as I do not think I will enjoy it.

What I Liked: I loved the beginning, which is just a straight historical. Juliet Moreau is the daughter of a disgraced now deceased doctor, plunged from genteel life to eking out a living as a maid and fending off advances from predatory males. After stumbling across students attempting to duplicate her father's vivisections, the controversial procedure that led to his downfall, she is shaken but reunites with her family's servant Montgomery who reluctantly agrees to take her to her father's island for it is either that journey or resigning Juliet to a life of prostitution. The historical details were just the kind I liked-painting a vivid description of the dark side of Victorian London. Although there are some creepy moments as Juliet ponders her father's experiments, it is mostly the calm before the storm.

What I Was Neutral About: Once on the island, Juliet has an uneasy reunion with her father and learns more about how he has continued his work, playing God by attempting to turn animals into human-like creatures. She is mostly horrified as she knows polite society would be but she feels that she in part takes after her father and is thus also impressed with his work. This mix of feelings causes her great unease. Despite the measures taken to protect the safety of the island's human inhabitants, the wrongness of the experiments still hangs over and the unrest of the animal-men adds a very scary element to the book.

What I Disliked: or more appropriately perhaps, "What I Loathed": there is a love triangle. Montgomery is one component, having been close to Juliet in her former life and having now grown into a fine young man. The other is Edward Prince, a gentleman and thus closer to Juliet in status, who was shipwrecked and brought to the island due to Juliet's compassion. It's not that I hated either guy (although I didn't really like them); it's that I hated Juliet's feelings about the guys. Oh my, she could not have been more back and forth about them. One sentence she'd talk about how into Montgomery she was and then the very next sentence would be gushy about Edward. It was awful and ever so annoying.

Overall, because of how much time was spent on the back and forth over the two guys, I did not like this book and I think there will be others who hate that same aspect. On a more personal note, I as someone who was creeped out by the very descriptive scenes surrounding Moreau's work in creating his new animal-men-those of us with weaker stomachs will likely be turned off.

Cover: I've read quite a few Waiting on Wednesday posts that gushed over the cover but I don't really like it. I know I love covers with pretty dresses but this dress is not pretty and I find the red type so close to her red ribbon distracting.

Question: Have you read The Island of Doctor Moreau? If you did and if you liked it, can you give me some reasons why I shouldn't just write it off?

Other Opinions
Beauty and the Bookshelf-loved it!
Reading Under the Willow Tree-4/5 stars
The YA Kitten-3/5 stars